McLaren is considered to be one of the most famous, and at the same time, the youngest car brands. All McLaren models are unique and look like they came to us from the future. The real legend of the company’s line-up is McLaren F1 – one of the best supercars of the twentieth century, which has become a symbol of an entire era.

While Bentley and Aston Martin are well-known British manufacturers of exclusive cars, McLaren is famous for their Formula 1 team and its racing history.

Hire a futuristic McLaren car with Luxury Prestige Car Hire, and experience an incredible thrill of dynamic driving. High performance McLaren models will make your heart beat faster. Though the speed is not as important as safety, the durability and safety is what the creators of this luxury car spend more time on.

The McLaren team, named for its founder Bruce McLaren, who was not only a racer, but also an engineer, was founded in late 1963. The team was one of the most successful in the racing in 1960s. In addition to team’s brilliant performances, McLaren built numerous copies of their victorious cars for sale. This was the beginning of the British manufacturer era.

McLaren is the embodiment of sustainable power. Emotions from driving begin to explode the moment the arrow on the speedometer moves up. Immerse yourself in the world of unforgettable sensations behind the wheel of McLaren supercar.

Take the opportunity to rent McLaren with Luxury Prestige Car Hire to experience the joy of riding a daring and high power beauty of the British manufacturer.

Renting a McLaren will give you an opportunity to immerse yourself in a dynamic and luxurious lifestyle, and at Luxury Prestige Car Hire we offer you one of our available models we have in our luxury car park: McLaren 570S Spider.

McLaren 570S Spider is a race car for the road, it offers drivers an unforgettable driving experience. Fully focused on driver and performance, the 570S will impress with its rare combination of sophisticated ergonomic design and racing technology. Causing envy among others in its class, this car has the most effective power-to-weight ratio, providing you with a dynamic ride every time you get behind the wheel.

Take advantage of the rental services of luxury cars at Luxury Prestige Car Hire, and hire a breathtaking car, with unique style and elegance – McLaren.

Our managers at Luxury Prestige Car Hire will be happy to help with arranging a rental of McLaren for short or long term, and can even arrange a delivery to any location, a hotel or an airport. Call us now to book one of our extraordinary luxury supercars, or fill out the form and we will call you back. We will be happy to set you up on your adventure. 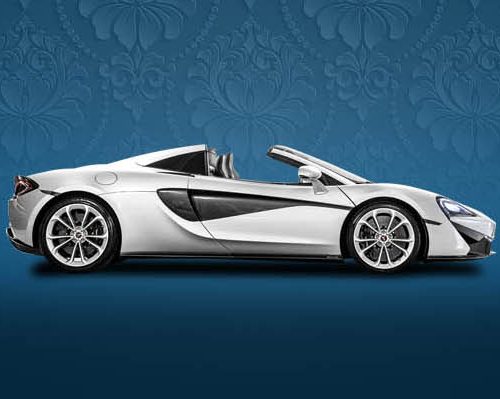 McLaren 570S Spider is a race car for the road, it offers drivers an unforgettable driving experience. Fully focused on driver and performance, the 570S will impress with its rare combination of sophisticated ergonomic design and racing technology. Causing envy among others in its class, this car has the most effective power-to-weight ratio, providing you with a dynamic ride every time you get behind the wheel.

You can find out more about which cookies we are using or switch them off in settings.

This website uses cookies so that we can provide you with the best user experience possible. Cookie information is stored in your browser and performs functions such as recognising you when you return to our website and helping our team to understand which sections of the website you find most interesting and useful.

Strictly Necessary Cookie should be enabled at all times so that we can save your preferences for cookie settings.

If you disable this cookie, we will not be able to save your preferences. This means that every time you visit this website you will need to enable or disable cookies again.

This website uses Google Analytics to collect anonymous information such as the number of visitors to the site, and the most popular pages.

Please enable Strictly Necessary Cookies first so that we can save your preferences!